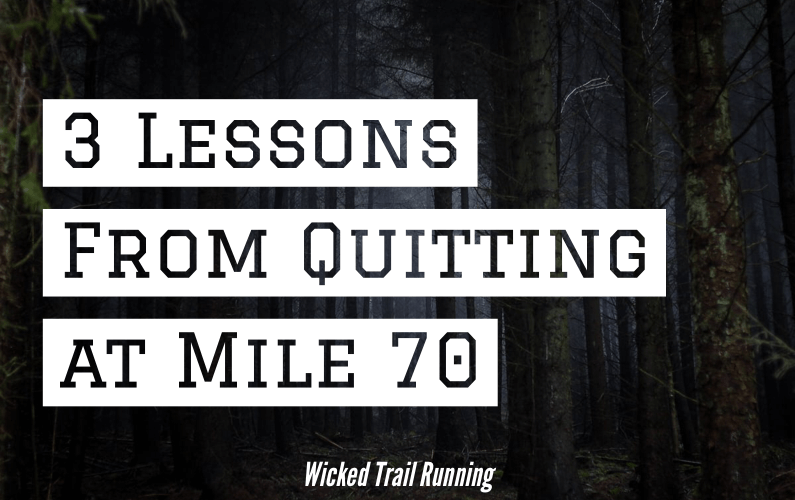 It was not how I imagined finishing my first 100 mile ultra marathon.

I pictured gritting my teeth, conquering, and smiling across the finish line of that point-to-point race from Cleveland to Akron, the Burning River 100.

I didn’t expect to cry, fall asleep peeing, and utter the words I can’t in the nighttime darkness of some cornfield.

But I did it. [click here to read about it. Hint: I was unprepared]

And I was eager to do it again.

So, what went wrong?

Why did I DNF my second 100 mile race, the Umstead 100 in Raleigh, North Carolina, 8 months later?

I blamed myself –as I should have—but when my hazy mind cleared, I finally made sense of the whole thing. I drew it out, watched myself say the words I’m done, and came to terms with what went wrong.

Most people point to nutrition, cold, or poor training.

Many will call out the terrain, their nagging injury, or some supernatural calling to drop out.

It just wasn’t my day.

You have to know when to quit.

I made the right decision.

At the Umstead 100, I made the wrong decision. 8 months later, I have finally organized that Moment of Quit in my mind. Here’s three things I learned:

I remember the night before the race I joked proudly about being ready for a sub-24 hour performance. I could taste it after my 8:21 run at the Light 2 Light 50. I knew I was fast enough, and I knew I had the right mindset.

Didn’t I have the right mindset?

I think the better question is: Did my mindset line up with my preparation and focus?

That’s the better question. The answer? No, my mindset did not line up with my preparation and focus.

Had I realized that simple fact, I might not have dropped.

This is an easy one.

Umstead was the first week of April. The first week of March, I ran the Belmonte 50 in the rugged Blue Ridge Mountains of Virginia. One month earlier, in February, I won the Light 2 Light 50 mile race on the Outer Banks of North Carolina.

“You were prepared!” I just heard you say.

False; I was prepared to put miles on my legs, sure, but not to PR at the 100 mile distance by five hours. Had I accepted a finishing time of whatever my body goes for, I would have finished. Instead, I held my goal of 24 hours firm. It was fragile and soft; it wasn’t ready for fulfillment. My firm grip weakened it.

My second and third 50 mile races –Belmonte and Light 2 Light– torched my legs. I needed recovery time, not a 100 mile race with a huge goal at stake, only one month away.

Umstead could have been a stepping-stone to my 24 hour goal. Instead, I decided it was this moment, and only this moment. When the moment of fruition passed with nausea and twitching cramps, I lost focus.

Shouldn’t he be doing better?

He said 24 hours. I don’t know about that anymore.

I realize now, however, my focus was lost before I toed the line and before those voices started chiming through the trees.

I won’t bore you with details of my nutrition the night before (though I think I described it on my Umstead 100 race report). It wasn’t unhealthy options that drew my focus; it was quantity and conversation. Lost in hanging out with family and friends, I did not plan. I did not plan my dinner or my super-food smoothie or the cleansing juices I’d drink before bed.

My focus, with laughs and food and light conversation and speculations of grandeur, moved away from the massive challenge before me.

Did my mindset, my contemplation of that 24 hour finish time, line up with my focus?

Had it, I would have paid grave attention to my eating and drinking, to overconsumption. The issues of poor nutrition compounded overnight, into race morning, and along that gravel trail.

Nutrition was not the issue; focus determined my drop.

Focus lost the night before and a goal unsupported by preparation, my mind rattled with doubts and insecurities. We’re supposed to take care of these in training, doubts and insecurities. Explore fatigue and pain, train when it’s inconvenient, and lose yourself in that Taller Peak. Drag doubts with you on those tough hill workouts; bring your insecurities to the weight room and pound them out.

Harden your mind to the voices of quit, the ghouls of ease and comfort, and leave pride at the starting line.

You don’t have to quit.

You have to leave pride at the starting line.

Isn’t that why you came here?

Are you ready to find out how tough?

Are you tough enough?

Let’s find out; let’s transport you to mile 70 of your 100 mile race. It’s cold, wet, and your stomach is turning with nausea. You hamstring is torched and your hip flexors struggle up the loose gravel climbs.

This was my message to any voices of doubt: I’m tough!

And I suppose I am. But aren’t there times in life when being tough, or hard, or badass, is not enough? I didn’t learn this lesson at Burning River. 8 months later at Umstead, when the pain and fatigue and miles stacked up in front of me, I asked myself if I was tough.

George, are you tough?

Then, a voice whispered through the trees: So what?

This shook my will: So what if you’re tough? You’re not this tough! Have you felt this pain, this nausea, this fatigue before? I think not! You might be tough, but I am tougher.

It was the race, whispering through its own pine trees and along its own trail.

How tough are you George? You aren’t this tough! the race would whisper as I cramped up, or stumbled over a root, or sat shaking in a porta-potty.

I was living the Tough Narrative.

Don’t live the tough narrative; it’s a sham, a lie of culture, that toughness equates success in hardship. There are plenty of tough guys and gals out there running ultra marathons, running the race of life, and venturing down their own Wicked Trails. If toughness is your ally, your well of strength, there will be a race, an event, a hardship, that punches you in the face and questions just how tough you really are.

That event for me was the Umstead 100.

It didn’t matter why or how or when the event went wrong.

My toughness had never been tested in the ways Umstead went wrong. And toughness never can be perfectly vetted; the combinations and situations life might throw at a person negates a person’s well of toughness. It simply does not matter how tough you are.

It took me months to realize this simple fact.

How tough you are does not matter.

I mean your willingness to endure.

I mean your voluntary commitment to the finish line.

I mean your patience.

I mean your mind’s decision to exist in pain.

Do not fight through pain. Do not push it aside. Do not smile through it or grit your teeth or become some depleted victim of discomfort.

Exist in the pain. Acknowledge its purpose in your pursuit, its promotion of your spirit in the direction of the person you are called to be.

Pain is a wicked teacher. He shows us our shortcomings and puts our anxieties on display for everyone to see. It brings out frowns and tears and impatient outbursts.

Do not be a victim to pain. Exist in the pain and carry on toward the finish line without hurry or expectation of relief. If you expect relief, or some escape, the miles will weigh on your fatigued mind.

Exist in the pain.

Thank yourself for voluntary commitment to challenge and look forward to the person who will come out the other side.

I’ve written about patience before. It’s paramount to success in training, on race day, and in general satisfaction with life. Impatient people can’t run 100 mile races. The training and preparation, the reliance on others, and the pain (see above) create a distance molded in exclusivity.

It’s not for everyone.

I thought I knew patience, this ticket to the starting and finish line of ultra marathon distance events.

The Umstead 100 taught me a new lesson in patience.

With as much elevation gain and loss as the entire Umstead 100, I still thought a sub-24 hour race was on the table.

It wasn’t. And I shouldn’t have gambled my entire race-satisfaction on that benchmark.

Three races of at least 50 miles in three months was a lot for a relatively new ultra marathon runner. Had I acknowledged my expected fatigue and muscular breakdown, I might have approached Umstead as a slow and intentional training run for a sub-24 hour attempt later in the year.

I might have stayed healthy and finished the race with an eager and distance-acquainted mind, unencumbered by the deadly pride that left me doubtful and insecure.

4 races in as many months, and my goal remained far out of reach up my personal mountain.

My legs and feet were beat; my sense of ability and optimism were damaged.

It wasn’t easy to take stock of what went wrong.

I see now how a castle is built. It’s not rushed for fear of some unseen enemy. It’s not built with bloody hands and fatigued troops. It’s built with intentionally placed blocks, not a dumping of bricks and stones into a pile, hoping some land in the right place.

Veteran ultra marathon runners have the legs and feet and lungs for exceptional feats. New runners (and I am talking to myself here), take your time. Be patient in your goals and build intentionally, knowing that to summit the mountain, your must be well-rested, have strong legs and callused feet. You must have been on the mountain for some time, and with some direction and purpose.

Do not look for the summit your first week, month, or year.

Climb on, and be patient.

Five races in four months (I forgot to mention a trail marathon one week after Outrun 24 Hour, which was one month after dropping from Umstead) left me scrambling along a shale ridge, precariously close to a steep drop off the mountain of my goal. Rushing back into training, impatient to get another race in before the year expired, knocked me right off.

Here I am four months into a medical running hiatus, eager to lace up and start back up the mountain and thankful for healing. I learned some things and earned some medals in those 5 races from February to May, and –though it’s hard to say out loud—I would not go back and change anything.

The stacking of races, the dropping from Umstead, and the injury that followed too much running for a novice ultra marathon runner taught me some invaluable lessons to carry forward on my Wicked Trail.

Isn’t that why we run these races?

I peruse UltraSignUp nearly once per week, searching for a comeback race, a first step toward my goal of 100 miles in 24 hours. I won’t rush into it. I won’t neglect the rest and growth between races. I might do some 100 mile races with no goal before another attempt. I will be patient.

I might not be tough, and I might not take any expectations into the races that follow this period of healing, but my goals don’t require those things.

They ask, and I have my answer.

Welcome to the Wicked Trail…