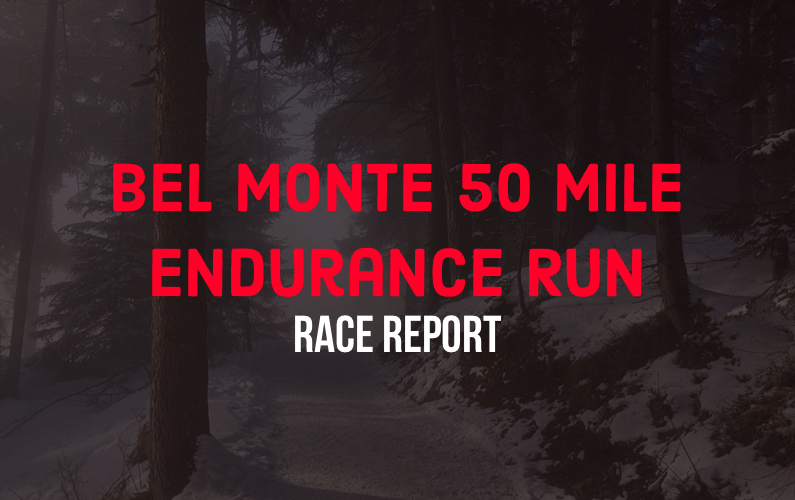 We didn’t expect snow, and we didn’t expect my sister’s SUV to be anything less than AWD, but (just like an ultra marathon) weather in the mountains of Virginia is fast-changing and can be hard to predict.

My first mountain ultra marathon, and third 50 mile race, was the Bel Monte 50 Mile Endurance Run in the beautiful Blue Ridge Mountains of the southeastern United States. Like most races in new environments, or with parameters I’m not accustomed to, I chose to abandon expectations and experience the individual challenges of each moment, something that might have prevented my first DNF less than one month later at Umstead 100.

Bel Monte, this ultra marathon adventure, was a new experience for me in four ways:

The emotional advantage of having Cowboy 🐶 at the aid stations with my sister and girlfriend should have been enough to propel me to my second ultra marathon victory in 2 months, but my road legs were in for some hard learning.

Staying at Wintergreen Ski Resort, our trio (and Cowboy) had a 10 minute drive up the mountain to Royal Oaks Lodge, the race HQ, to pick up my race shirt and bib on Friday. We unfortunately never made the pickup; the snowfall was a lot more than we expected. If you are planning on running Bel Monte and snow is expected, find a place to stay north of Royal Oaks resort; this will allow you to avoid the dangerous Blue Ridge Parkway and the snowy climb up the mountain.

The race itself was a challenging, exciting, and rewarding first mountain ultra marathon. The staff and volunteers performed a well-orchestrated dance to change aid station locations (due to the adverse weather) and pull off three race distances over very rugged terrain.

I was admittedly unprepared for trail running; I’ve done an *estimated* 10 miles worth of trail running in the last two years. Trails in Raleigh are much different, I found. I expected roots and pine needles and I got mile-long sections of cumbersome rocks and uneven surfaces. It was a challenging and mentally stimulating first experience.

My biggest takeaways from this 50 mile race were my experiences on the climbs and on the terrain, and the fact that much of the course was runnable.

The course boasts three major climbs you have to prepare physically for. The longest is three miles of terrain that isn’t runnable by mid- to back-of-the-pack runners. This climb starts just after the Kennedy Trail aid station at mile 17 and flattens out around mile 20. The terrain from miles 20 to 22 is runnable with a few small climbs. The course then becomes quite rocky on the four mile descent to the turnaround at the Stony Run Trail aid station.

The second major climb is back up the four miles you just came down. From miles 26 to 30, the course climbs back up; it’s a more gentle and runnable climb than the one from miles 17 to 20, but longer and much rockier. I probably ran 1/3 to 1/2 of this section on legs that still felt great.

The third climb was quite gut-wrenching for me because I forgot how steep it had been when I ran down it. I didn’t remember the steep downhill from miles 7 to 10, and I was certainly was not expecting it to be so hard going back up. This climb from miles 43 to 46 featured mostly 20%+ grade with a few portions climbing over 30%. It consisted of a gradual climb leading up to 1 mile of switchbacks.

This section of the course torched my now-beat-up legs; when it ended, I could taste the finish line even though it was still six miles away. Mentally, this was the toughest of these three climbs because it was so late in the race and because of how steep it is.

Another climb occupies miles 3.5 to 7, but this was so early in the race that I don’t recall anything particularly difficult about it.

As I mentioned, the terrain was much rockier than I anticipated. My feet were pretty beat up after this race; I learned that downhill running on rocky terrain is a tripping hazard and can be a nightmare for toenails.

Aside from the three climbs mentioned above, I was surprised by how much of this course was flat and runnable. The terrain, however, is rough and –especially if snow persists on the course– can be a bit muddy.

There were two or three stream crossings that did not provide a dry way across. These were each in the first third of the race after coming down the gnarly switchbacks. With my Injini socks and Altra Lone Peaks, however, I stayed in the same socks and shoes and came away with no blisters.

Snow and ice can complicate things, especially for ultra marathoners who are new to the mountains. Prepare accordingly, in gear and mind.

The climbs and terrain were my two biggest takeaways as a new-to-mountains runner. I felt very strong throughout the race and made it to the turnaround well before it’s cutoff. I arrived there in five and a half hours and was confident about my return. The second half of the race, especially miles 43 to 46 proved to be very challenging.

I ended up making the 13 hour cutoff with 8 minutes and 30 seconds to spare, one month after winning an ultra marathon on the flat beach roads of coastal North Carolina.

This is the beauty of ultra marathon running; each race is so unique and presents challenges that a runner will never have in combination again. I won’t ever have another first mountain ultra marathon.

I would highly recommend the Bel Monte 50 Mile Endurance Run to anyone looking to step into the mountain ultra scene. It was a beautiful, well-organized event that challenged me in unexpected ways and tested my mind late in the race, all while providing runnable terrain for much of the race.