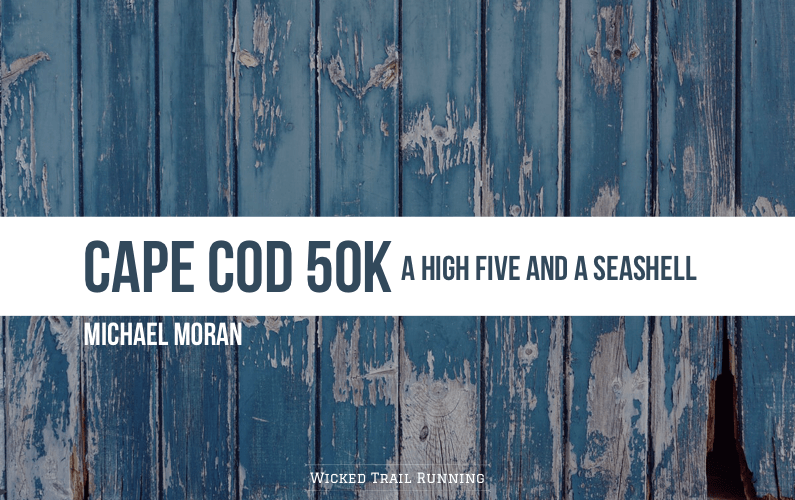 Cape Cod 50K: A High Five and a Seashell

By the time I reached mile 28 of the Cape Cod 50k, I had already gone cosmic.

I fell on a root, experienced a full body charlie horse, got up, smiled with deep satisfaction, and held my arms out by my sides like a drunk sugar glider. While I was air-planing down the trail, I was thinking about how much love I had for the universe. I don’t know why I do this in ultras, and it’s probably a sign of impending death, but it feels weirdly good. I was in a zen space, filled with the joy of moving fast through the woods.

A moment later, all that changed when I passed a runner who yelled, Hey, I think you might be in second place!

With only four miles left in the race, this was like a Nintendo-style power-boost. I had spent the day focusing on the essentials: hydrate with water and electrolytes, chipmunk my cheeks with Fig Newtons and Gu, guzzle pickle juice, run within myself and maintain on climbs.

Let me be clear, I am by no means a competitive runner and, in my mind, I had no right to be in second place. By the time this news got to me, I had run a smart race and was ready to burn the deck if needed, but I am just a standard plodding trail yeti, so this was weirdly exciting.

I let out a startled chortle of excitement and began hunting for the leader through the woods.

Two months before the race I crafted a massively uncomfortable plan of action to be prepared. Not only did I add a bonus 10 miler to my weekly 18-20 mile long run, but the bonus run was on hilly, rocky trails.

And it gets worse.

I asked my buddy Ben to join me for the purpose of causing massive levels of red-zone discomfort. Oh, and it was February, so this was all done in ankle deep snow: the struggle shuffle cocktail.  I gasped for breath behind this smug, stupid, well rested jerk who was grinding me into a pulp. Didn’t he CARE that I just ran 20 miles the day before? No, he seemed to have a stunning dearth of empathy. Thanks, Ben.

On the back side of the penultimate climb of the race, I found him. The clearly exhausted runner,  who would now become known as Second Place, waved at me as I passed. His bib showed that he was running the 50k and he said he was on his final lap. I wished him luck and started my three mile trek to victory.  I was running hard and smooth when I saw another runner with a 50k bib. I needed to check in with him and find out if I was racing him or not.

“Almost done!” I gasped, hoping that he would say he was only on lap four of the five loop course.

At the starting line of the race, you could almost taste the frenetic enthusiasm of a 20-something year old Jim Walmsley body double in Fruit Stripe Gum themed apparel.

Donning a neon crop top and running hard sprints up and down the starting area, he was far too busy peacocking to return my pleasant “Hey, man, ready for a fun day?”

He was a weapon, apparently. A sharpened blade. Just before the gun went off, he continued aggressive jumping moves right next to me, looking like startled cattle. I realized how nervous he was and how much he wanted to destroy this race, so I leaned over and wished him luck. I did this again four miles into the race as I passed him on a hill. He said nothing and never got to return the favor.

In the final mile, my left calf was cramping hard and my left foot felt like it folded in half. I had to drag the leg behind me, but adrenaline gave me enough steam to keep my gap from New Second Place.  I was going to cross the finish line and hear the announcer call my name as the winner of the 50k… I didn’t care if I was on actual fire or my leg fell off, my leg and skin would grow back. As I crossed the line, my friends let out a tepid cheer and some dull claps.

I think someone said “Cool, you finished.”

I took a moment to let it sink in.

The medals were seashells.

It was almost as if they were saying, grab something off the ground for an award and stop smiling so much. Classic New England hard core. There was no podium moment, no ceremony, not even an age group mention.

The race director gave me a high five and said, “Good job!” He was the person at the aid station, alongside all of the wonderful volunteers, filling my hydration pack every 10k and encouraging me, just like every other runner.

I walked over to the winner (Actual First Place) and congratulated him quietly and recapped the day together. I hobbled to my car and drank a Gatorade with my daughter. I drove an hour and a half to get home.

We all spent the day in the woods challenging ourselves and received a well organized race that wasn’t about glory or material rewards. It was entirely about an experience. There was no technicolor finish line with a medal and a swag bag waiting for us. There was no external symbol of what we had accomplished, except for the really pretty seashell I was now admiring around my neck.

Does Michael’s post resonate with you?
Let him know what you think below.