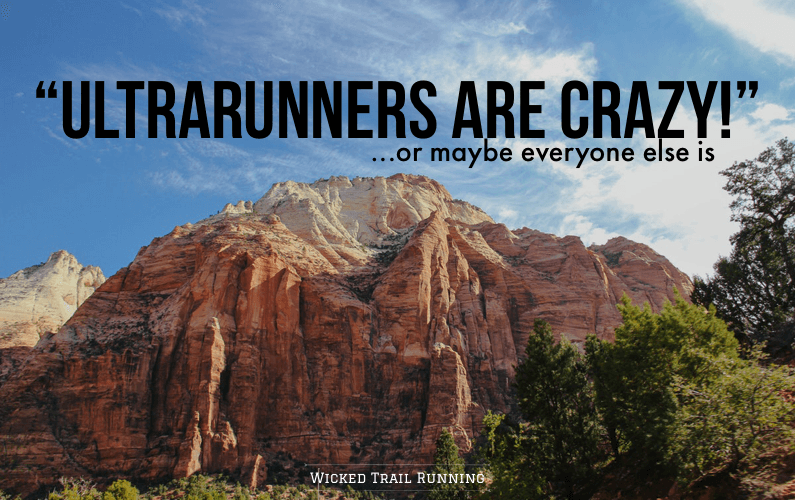 He peers through the trees.

“Wait. Yes! I see them, too! Up that ridge; there! They’re climbing the mountain, into the trees…”

Wiping the condensation from his glasses and adjusting his umbrella, the man climbs back into his sedan. All around him, filling every spot in the parking lot, men and women shake out their umbrellas and climb into cars. “Escape the rain,” their thoughts demand. “Get dry.”

Where are they going? he wonders.This storm is only getting worse. They need to come down the mountain and get to their dry and warm cars.

He looks around the parking lot.

As if he were in a dream, every car has become his own and every man and woman resemble him. They’re all looking up into the woods, peering through the trees, trying to make sense of the trail runners adventuring through the storm.

Hundreds of copies of him, and his own eyes, plead for meaning from the runners.

They don’t see him. They’re not looking down through the trees to the parking lot; the peak fascinates their sense of wonder and holds the attention of the group. They run on.

The man sinks into the seat of his car. His candy wrappers and pop bottles mock him with bright colors; their contrast to the weather outside doesn’t escape him. Sweetness and pleasure wrapped in well-marketed packages, the dry comfort of a car, and the steady hum of other humans existing, other normal people, didn’t keep that group of trail runners from venturing into the rain, through the dreary downpour.

He has nothing to worry about. Nothing to sweat. No real adversity.

“Perfect,” he voices aloud. Isn’t life supposed to be this way? Free from pain, from worry. Free from adversity It must be the right way. The others in the parking lot nod in agreement.

He writes off the trail runners as ‘fitness junkies’ and ‘nature lovers.’

“Maybe they’re crazy.” He drives off.

He’s done it. Driving back to culture, the culture of mediocrity, a comforting warmth envelops him.

He had goals at one point, visions and aspirations. But he was called into the ranks of the masses many years ago when he allowed comfort to reign as his master. He sought comfort, the easy way, the quickest route, every single day.

It started in college; do the minimum work to get by. Make time for school work. Prioritize the social life.

It carried over into the gym; he just wanted to ‘maintain.’ He wanted to look a certain way. [This mentality is toxic: Read About It]

When he landed a career, it wasn’t what he thought it would be. It became a nine-to-five routine; Monday was dreadful and Friday was a daydream. A cyclical pattern, following that of society, ensued.

Weekends were for relaxing and weekdays were for routine. He’d made it. This was it; where the ideal path led. No goals, no visions, no aspirations.

How do people lose them? Why did the man in the parking lot, the man stuck in a nine-to-five routine, call the trail runners crazy and drive away? Did he not also once desire to climb mountains and experience life?

When a person unknowingly commits his or her life to comfort through a conviction of culture, that person chokes off the air keeping his or her aspirations, visions, and goals alive.

Those aspirations, visions, and goals are the highest peak those trail runners were chasing through the storm. World travel. Financial independence. A passion-based business. An Olympic gold medal. The finish line of an ultra marathon.

Lucky, gifted, privileged, crazy. Label another person as one of these; excuse your lack of drive through aspirations, visions, and goals. Nobody will blame you. People will agree with you. You’ll all nod together in the parking lot; everyone else, after all, has committed to the same fate: comfort.

Comfort is the executioner of greatness, of fulfillment.

“Maybe I’m crazy.” A rush of emotions flood his mind. “Maybe I’m crazy for staying in my car, like everyone else, during the storm! I’ll never know what’s on top of the mountain. Hell, they’re probably already up there celebrating the end of another adventure. They’re high-fiving and counting their scars, telling stories and laughing.

He swings his car around and hurries back to the parking lot. All around him, other common people, people lost in the cyclical pattern of society, stare up the mountain and whisper about the trail runners. Climbing out of his car, he shuffles over to a trailhead. His umbrella remains behind.

He finds a soaking wet runner standing in the rain, waiting for him. Thunder rumbles the sky; the trail is dark and winding; it is riddled with roots and rocks. He is suddenly cold and afraid of what lies ahead.

The runner takes note of his pressed pants, sport-coat, and glistening watch. His designer shoes, now covered in mud, once told a story of comfort and complacency.

“Welcome to the Wicked Trail.”