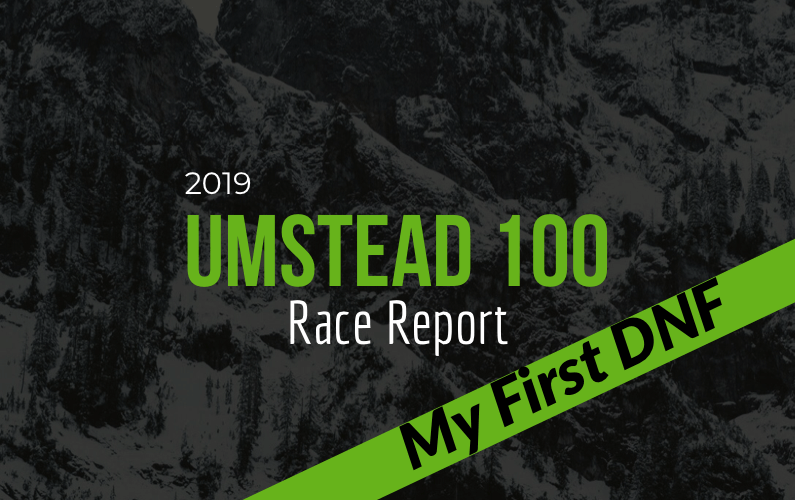 I’m not one for dramatizing a DNF, let alone my first DNF, so I’ll get right to it.

My first DNF came at the Umstead 100 Mile Endurance Run on April 6th, 2019 not because I wasn’t physically prepared, or I didn’t sleep well or was sick, or because I needed to train for specific terrain; I dropped from the race because I was not mentally prepared for the challenge.

To be more specific, I allowed myself to become unplugged from my goal in energy, focus, and intention.

Had my mental preparation been sound, had my mind been fixated on the finish, I would not have quit, and these two reasons for quitting would have been left out on the trail with everyone else’s excuses.

Instead, I carry them with me.

“I decided to quit. Here’s what I learned.”

I often say Welcome To the Wicked Trail at the end of my post introduction. This 2019 Umstead 100 DNF will be no different; sometimes you have to fail and accept that your energy, focus, and intention caused the failure. You have to revisit the failure and identify why, in the Moment of Quit, you left the battle.

The Umstead 100 mile endurance run was my battle. When the Moment of Quit arrived, I gave in. I left the battle.

Welcome to the Wicked Trail.

Nutritional blunder is not a good DNF excuse because it should be avoided in the first place.

The night before the Umstead 100, I changed my eating pattern; the volume of my dinner was massive and by the time 8 o’clock rolled around, I was stuffed.

I took my eye off the goal and went in for a second plate of food -a huge second plate- because everyone was sitting around and chatting. Why not put some food in front of me and enjoy the company?

Staring down the barrel of a 100 mile run, I should’ve done the opposite.

After this massive carb-festival, I remembered I had a nutritionally dense smoothie I wanted to drink before bed so everything would be ‘moving along’ in the morning. But, wait! you might interject. Weren’t you stuffed?

Yes I was. I was already stuffed and I drank a thick 16oz beet juice smoothie.

Oh! I realized, I brought cold-pressed juices. I wanted to have one of these today as well. They’re so great for you!

I drank a bottle of cold-pressed juice. Right on top of my smoothie and all that pasta.

I hadn’t eaten anything unusual. However, the volume and timeline left me feeling stuffed even upon waking the next morning.

Nutrients and calories were my goal. Instead, I ended up bloated and nauseous the morning of the Umstead 100.

Had my mind been ready for this run, had I respected the distance and the task at hand, I would’ve paid better attention to pre-race fueling. Obsession with nutritional timing and volume would have replaced lax thinking. I would’ve spaced out the things I wanted my body absorbing and had an earlier, lighter dinner because my mind would have told me anything else was not good enough, the distance demands better.

I woke up already full and couldn’t use the bathroom. Attempting to eat my usual avocado toast and oats and quinoa with blueberries, I felt sick and was still full.

By the time the countdown was ticking down seconds at the start line, I wasn’t even thinking about being full. Fueled and ready to go, I had confidence in my high-quality food choices!

When I reached the first aid station at mile 6.85 in less than 61 minutes (side note: a little fast there, eh George?), it all came out.

Just like that, I was back on empty. I first thought this a wonderful turn of events! My stomach working, I could get some food down early to fuel up for the long day ahead.

When mile 19.35 arrived and I saw my crew, I was ready to eat. One bottle of water, one bottle of cold-pressed juice, one banana, one-quarter of a PB&J, and some fruit and veggies. All within 2 minutes.

I was stuffed. Again!

This food formed a brick in my stomach. Again!

What was I thinking?

The night before, I wasn’t thinking; I was too casual. At mile 19.35, I thought I needed excess to replenish the nutrients I’d lost at mile 6.85.

I learned, however, that ultra marathon running is not an eat-fast-and-play-catch-up game, especially at the 100 mile distance.

Had I walked for a couple hours at the gun or after mile 19.35 to let my stomach reach normalcy, or had I nibbled on some solid food from miles 6.35 onward, eating small items over several miles, I may have not fallen into cyclical nausea.

When I ate, I would get nauseous and have to waddle to a bathroom. After the food passed, I’d try and play catch-up. I hardly ate from miles 31.85 to 56.85 as I tried to settle my stomach with appropriate quantities of salt and water.

First-half confidence waned when the sun began it’s drop and weakness-of-stomach persisted. Then, I started ultra-math.

You take an estimation of your current distance and subtract that number from the total of your race. Next, you estimate your current pace, add a couple minutes, and multiply it by the first equation’s result. This tells you how much longer your race will take, and whether or not you’ll finish.

However, ultra-math is never accurate.

It’s midnight, you’ve been running for 18 hours, and you’re multiplying and subtracting quantities of time and distance. It does not work!

You can’t do math after running for 18 hours!

Yet we all do it; we all run through estimations and scenarios. We convert from hours to minutes and divide into miles. Monotony on the trail allows the mind to wander.

I didn’t think I had enough time to finish when I reached mile 69.35. Based on my nutritional state and mental fatigue, paired with the pain and 30 more miles, I agreed to my first DNF. I looked inward and said “you do not have what it takes.”

A volunteer asked if I wanted to think about it and eat. I politely declined.

My stomach hadn’t felt solid on any of the previous 6 loops. I didn’t want to walk 30 more miles; the math told me I wouldn’t make it.

I pulled the plug because I thought I was moving too slow and getting sicker.

Reflecting On My First DNF at Umstead 100

Nutrition and ultra-math, again, weren’t reasons I quit, but lessons I took away from my first DNF.

I’ve personally identified a dozen things I believe contributed to my failure at the Umstead 100. I can’t put them all here because I need to work through some of them on my own, but here are a few:

In summary, the energy I’d entertained and the objects of my focus had not been conducive to running 100 miles at Umstead. The Wicked Trail demanded more, and I got lost in the listed items, and others.

Moving On From My First DNF At Umstead 100

A DNF is always a choice. Mine was honestly easy to make and I haven’t felt much regret. I remember what 30 more miles meant at Burning River, the death march that changed my life. I’d surely be different had I walked to the finish at the Umstead 100, whether there was anyone there waiting or not, but maybe this lesson came at the right time.

My lack of regret, my confidence, is rooted in my knowledge of the Taller Peak, the one I saw at Burning River. I stumbled at Umstead because my eyes have wandered to the warm campfire cutting through the dark forest, through the rain of discomfort.

Focus on the goal.

Contribute to and participate in positive energy.

Welcome to the Wicked Trail.